I was giving history lessons to 10th graders, and once I had managed having a Socratic circle about the qualifications of a good leader. Our key example was Alexander the Great. But blogger T. argued in favor of Barack Obama, describing him as a hero. She was confident, fluent and increased my curiousity about her. On her blog she leaves no doubt ”I am a: musician – songwriter, singer, pianist, student, trying to be a blogger, haha, polyglot and just simply “the girl next door.” And a lot of other things, she is that kind of girl who would gain every teacher’s attention. Her family moved from Armenia to Riga, Latvia, where she started her studies at a Russian school. She then continued at a Latvian high school. The shift from Russian to the Latvian environment was a tough time in her narrative ”Students were bullying me because of my nationality, hair and other things but mainly because I was someone, they had never seen before. I heard phrases like: ”I don’t like her. Is she even a human?”, “Your curly hair… It looks like you just came from a madhouse!” Words like ”ugly”, ”crazy”, ”fat”, ”dumb” were something that I heard every day.” On the other hand, her ancestry became the source of authenticity. She often wears her great-grandmother’s century old hat. Vintage means the Caucasus where her story was started. And where is she going to?

Even though she lives in Riga, she is ”dreaming about Manhattan.” This she proves with photos that were taken under the Brooklyn Bridge. T. confesses ”You (i.e New York) changed my life.” I could have stated the same about Riga in that time. I felt myself like an entirely different man, who was seeking for inspiration, which was found or not I do not even know. T. adresses as an inspiration her great-grandmother, the ”maestro” Raimonds Pauls or Paloma Faith. All in all how this identity was fabricated made me interested in youth culture. I found it fascinating to observe this generation acting in between places and epochs. T. has had her first concerts in March at Miera iela (Peace street) which may be random or not, a familiar street to me too. I was taken to the Miera iela on a cold and dark winter day. It was almost empty, just the trams, few mobilized people at the stops. First the gate of the chocolate factory triggered my attention with its fancy graffitis. Those remote wooden houses also left a strong impression about the street. One could imagine pubs to be here for the local working class machos. But instead of pubs, there are creative cafes, second hand clothing shops and other trying to sell self-made stuff. 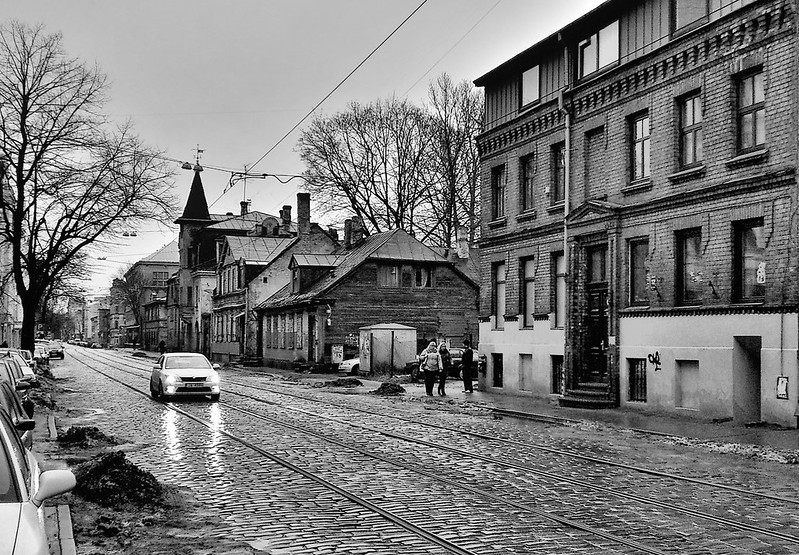 Entering these cafes, I could observe young adolescents in tight jeans, vintage shirts, boys with long hair and girls in their Latvian colored bracelets. They drink beer, eat lemon cake or Latvian flavored pancakes and listen to soul music sung by Nina Simone. The whole thing seemed to be an interesting mixture. When this alternative scene celebrates its birthday, called Miera ielas vasarsvetki, I saw a lot of people whose appearance was similar, yet the same time totally different though. Like those women who had flower crownings on their head but with different flowers, I guess intentionally done so. This street is very cozy. I remember a young guy laying with his dog in the window, meanwhile some were smoking at the entrance of the cafe letting the moment linger. As A. – a 10th grader boy from my school – said „DAD cafe is my second home.” And what are they doing at this quasi home? When I started dealing with my students’s lives and asked them to draw their mental map about the city to learn what places they prefer or avoid, I had already realized the importance of the net of pubs and cafes. They left comments with „catch-all” terms like „chilling”, „hopping” or „having fun time”. I perceived it as a real fight back, because in my lessons, I also talked about abstractions, like the family romance of the French revolution, that were alien to them.

But I did not give up….I am not that type of person. At the end of the school year I invited some boys to the DAD cafe to say goodbye. There were three boys coming, J., V. and R. from 11. c. I was waiting for them, and as usual, some teens have problems with time management. When they arrived we took place in a premise which looked like a living room. Behind my back was a book shelf full of Latvian books. We were seated around a small table, I was sitting on a sofa and the guys on armchairs. First we had a chit-chat that was mostly about my life. As an expatriot, my life was always exotic. I wasn’t truly considered a teacher. They treated me as a friend or a good mate. Expatriots are like teenagers in many ways. I invited them for some pancakes. ”It is my invitation”, I said. V. didn’t really like the idea, but in the end he accepted my offer if they can invite me for a drink. V. explained he was already working at a printing office and is living with his girlfriend in their own flat which they rented from a good acquaintance. In my opinion V. didn’t want to accept my generousity in fear of it diminishing his independence. We are equal here. After the dinner, a concert featuring a country folk rock band, the Sturi Zevele, began.

Meanwhile, they started teaching me Latvian board games. Their favorite was the the so-called Zole card game. They were always beating me, especially in the beginning. I should have given a better mark to R. when he was came up with a presentation about board games to the English lesson. In the breaks between the concert we moved outside from the cafe, where they were smoking and J. was talking about other places like the Ala folkbar, which delivers a more Latvian atmosphere. J. thought it is more cool than these hipster places. (So hipster is not cool, but here nobody is a hipster of course.) All in all, we were socializing. I do not want to suggest they do this always, but we didn’t look entirely different from the others in this cafe. Rather, these teens and I may have consumed too much celebrities, vintage hats and pancakes. It seems they create and produce patchwork identities for patchwork places. It is a charming bricolage of creativity. In between ”New York and Riga”, the global and the local a new playfield emerged where youngsters construct the ”Latvian cool”. T. was singing here a few weeks earlier, she contributed with her songs about her father and about New York at a Latvian cafe to the Latvian coolness, whatever it is. Why their school don’t realize it?